Fly of the Month February 2018 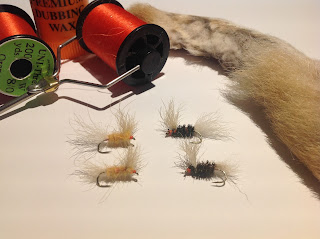 Hook:  Standard Dry Fly Hook.  Size #8 to #22.
Tying thread:   Fluorescent Orange 6/0 or 8/0 related to the fly size.
Tail:  Small bunch of hair from a rabbit’s foot pad.
Wing:  Larger bunch of hair from a rabbit’s foot pad.  Tied full as an upright clump, almost compara-style.
Body:  Under fur from rabbit’s foot.  Be sure to include some guard hairs to increase floatability.  Rabbit foots come in a variety of colors.  Grey/tans work great.  Also, I strongly recommend tying some up with a body of peacock herl.
Head:  Tying Thread.
This is a mangy, scraggly, fantastic pattern. It originally appeared as a “Fly of the Month” over 25 years ago.  Recently, my local TU Chapter tied it at one of it’s Fly Tying Workshops.  It reminded me of how special and productive this fly can be.  It was developed by Mr. Fran Betters of Wilmington, NY.  He was also the inventor of the “’Haystack’ type flies which were the precursors to the ‘comparadun’.
I’ve had such great luck with this fly over the years and tie them down to a #22.  I also tie them in size #8 and everything in between.  Why even the large size #8 ?   Well many years ago, HFFA member Max Ruggiero and I made the journey to Roscoe NY to fish the Beaverkill River for a week.   Late in the afternoons we would hit a ‘Green Drake’ hatch in a particularly slow section of the river.  The first afternoon we had very little luck landing fish during this hatch.  The trout had plenty of time to look at the flies that drifted by them and traditional green drake patterns were not working for us, or for any other fly fisherman on that section of the river.  My fly tying supplies on that trip were very limited but I did have a rabbit’s foot.  That first night I tied up a bunch of Green Drake sized Usuals.  Despite unusually long drifts, literally 3-4 minutes, Max and I did very well with that big usual pattern saving the day.
Here’s what I wrote about this fly more than 25 years ago. Please note that back then I thought this fly could only be used to imitate sulphers, but it’s much more than that.  Change the colors to match the naturals on the water.
“This particular pattern is designed for emerging sulphers.  It has been particularly effective at dusk.  It gives the trout a very low profile on the surface.  Also, the orange thread shows translucently through the dubbed body when it hits the water.
Begin by wrapping the thread from the eye to approximately 2/3rds down hook.  1/3rd down the hook shank tie in a clump of pad hairs ‘comparadun’ style for your wing.  Measure the length carefully so that the wing is ‘mayfly sized’ when you stand it up. Bring your tying thread in front of the wing and make wraps to stand it upright.  Next, tie in a clump of pad hairs for the tail. Don’t be skimpy.  Remember the tail, and wing clump on top are the only means of floating the fly.  The tail should be approximately 2/3rds the length of the hook shank.  From the tail, dub the rabbit dubbing up the hook shank for the body. Make sure to take 2-3 wraps of dubbing in front of the wing pad. Tie and cut your thread off.
This is probably the original rabbit’s foot emerger.  You will find that the pad hairs float the fly very nicely.  This fly is a double killer.  At the end of  your drift, try fishing it back wet with some twitches just below the surface.  Sometimes the fish can really zero in on this pattern and technique.  When I first started fly fishing I never fished this pattern much.  What a mistake.  If you are just learning to tie,  you can tie this pattern for virtually every hatch by simply matching the size and color of the natural.  A rabbit’s foot and dubbing can be purchased very cheaply.  You won’t have to mortgage your house purchasing expensive necks to imitate all the various may flies which can emerge throughout the course of the season.  As a searching pattern or during a caddis hatch, try substituting peacock herl instead of the white rabbit dubbing.”
Piscator Flies has a great instructional video on how to tie the Usual below:
If you have any questions about this fly or would like to submit a Fly of the Month I can be reached at 203 305-3850 or atpdinice@frontier.com .  This fly can also be viewed on my website at http://tightlinesflyfishing.blogspot.com/ .